Leave us a message

👉 Please save the link for further communication with support service

The introduction of Bitcoin some ten years ago brought a sigh of relief among people that felt banks were overbearing by asking too many questions that infringed unnecessarily on the users’ privacy. Bitcoin, thus, provided a means of transferring value without disclosing much personal information. It was a welcome innovation!

Over time, however, users realized that the nature of the Bitcoin blockchain and its public ledger, did not afford them complete anonymity. People that want to poke their noses into other people’s transactions can still do so. Unless you hide your transactions using a cryptocurrency mixer.

But, Just What is a Cryptocurrency Mixer?

A cryptocurrency mixer or tumbler is an online platform that allows users to obscure their cryptocurrency transactions. It does this by putting the user’s coins among a pool of crypto and then sending it to a discrete crypto wallet.

How Does a Cryptocurrency Mixer Work?

Essentially, a cryptocurrency mixer has a pool of coins drawn from various sources. When a user requests for a mixing service, the service provider puts the coins into the said pools, mixes them with the existing coins in the pools. The tumbler, then channels the coin to the new cryptocurrency address that the user specifies.

Most mixers put the cryptocurrency you send in alongside the giant pile they have already accumulated and then send it back to you in smaller units. It is your duty to create the recipient into which the mixers send the clean coins.

The platforms do charge a mixing commission, which ranges between 1 and 5%. SmartMixer allows cryptocurrency users to set the percentage commission they wish to pay.

In the broader sense, the activity of mixing is a lot similar to clouding your IP address while online using an obscuring browser such as TOR.

signals all over the world, and eventually hiding your actual location, the cryptocurrency mixers may take in 5 Bitcoin and in turn give you 10 0.5 Bitcoin from different parts of the world. The more sources the cryptocurrencies come from after the mixing, the more difficult it gets to track your transactions.

Comparing the Various Service Providers Operating in the Mixing Space

There are a number of cryptocurrency mixers. The prominent ones are SmartMixer, ChipMixer, and Wasabi.

Here is a look at these three and their various modus operandi.

The SmartMixer platform is a mixing service that gives cryptocurrency users the chance to attain complete anonymity when transacting. It is different from the various tumblers available online because of its straightforward operational system.

The tumbler has three different cryptocurrency pools. Depending on a user’s preference and commission payable, the coins will go into the defined pool for mixing before they are sent to the cryptocurrency address that the user generates.

ChipMixer promises a more random and nothing close to the predefined mixing procedures that other cryptocurrency tumblers offer. It creates Bitcoin addresses, then funds these with specific chip sizes of 0.001 BTC, 0.002 BTC, 0.004 BTC all the way to 8.192 BTC.

When a cryptocurrency user sends coins for mixing, the platform sends out a similar amount in chips. The said chips are funded before a deposit is made, meaning that they are anonymous and bear no link between them and the deposit you make.

To get mixed coins, you can withdraw the chips. In so doing, you will reveal private keys that you, then input in your Bitcoin wallet to facilitate funds transfer.

Wasabi is a Bitcoin wallet that is both an open-source and non-custodial facility, and whose focus on privacy is among the very heightened in the industry. It manages its coin mixing using a trustless coins shuffling technique called coinjoin, which gives out mathematically provable anonymity.

Coinjoin involves multiple participants combining their coins into a single large transaction that has multiple inputs and outputs. Participants in the conjoin cannot determine which input corresponds to what output, and neither can the observers. No one, as such, can determine the origins of the coins passing through the mixer.

When Do You Need to Use a Cryptocurrency Mixer?

Keeping your cryptocurrency safe – Consider a business executive who uses cryptocurrencies to pay his staff. If such an executive makes payments from his wallet directly to his staff without using a mixer, any of his workers can access his transaction records, and determine the balance in the boss’ wallet without much sweat. Using a cryptocurrency mixer helps you keep your accounts and the tidy stash therein safe from peeping toms.

Sending cryptocurrency or transferring value – As is highlighted above, every cryptocurrency transaction reveals a little more than is necessary. When you choose to send kin or business associates money using cryptocurrencies, there is a lot of financial information that they can decipher just by poking around your cryptocurrency wallet. A cryptocurrency mixer helps you take full advantage of crypto; the most convenient means of sending money, without necessarily exposing yourself.

Holding wealth in the form of cryptocurrency – China has restricted its nationals from holding or dealing in cryptocurrency. This move is in violation of the conventional human rights of the Chinese who should otherwise be exploring the potentials of crypto liberally.

Anyone that wants to disregard such authoritarian decisions can use a cryptocurrency mixer to both buy crypto and transfer it to a discrete wallet far above the scrutiny of the government and its overseer agencies.

When you want to obscure your cryptocurrencies transactions, you need two things; the coins you want to mix, and the new address(es) where you want the tumbler to send the crypto after mixing.

The SmartMixer platform, which is highlighted in this segment, has a choice of three other cryptocurrencies aside from Bitcoin, which are Litecoin, Bitcoin Cash and Ethereum.

You can choose to use the Tor browser as well, if you want to heighten anonymity.

Here is a step-by-step guide for mixing cryptocurrency using the SmartMixer.

1. Start by visiting the SmartMixer platform on regular browsers and smrtmxdxognxhv64.onion if you are using the Tor browser. Select the currency you wish to mix and click on Mix Now!

2. Key in the new address you created.

Note that for increased anonymity, you need to use more addresses. Ensure that you are on https://smartmixer.pro when keying in the new address(es), and not on a scam website.

Also note that the addresses you key in will depend on your intentions. If you want to purchase goods or services online, for instance, you will enter the cryptocurrency address of the vendor.

Users who are mixing coins to improve privacy will need to create the recipient wallet over Tor browser. The many of these that you create, the better. 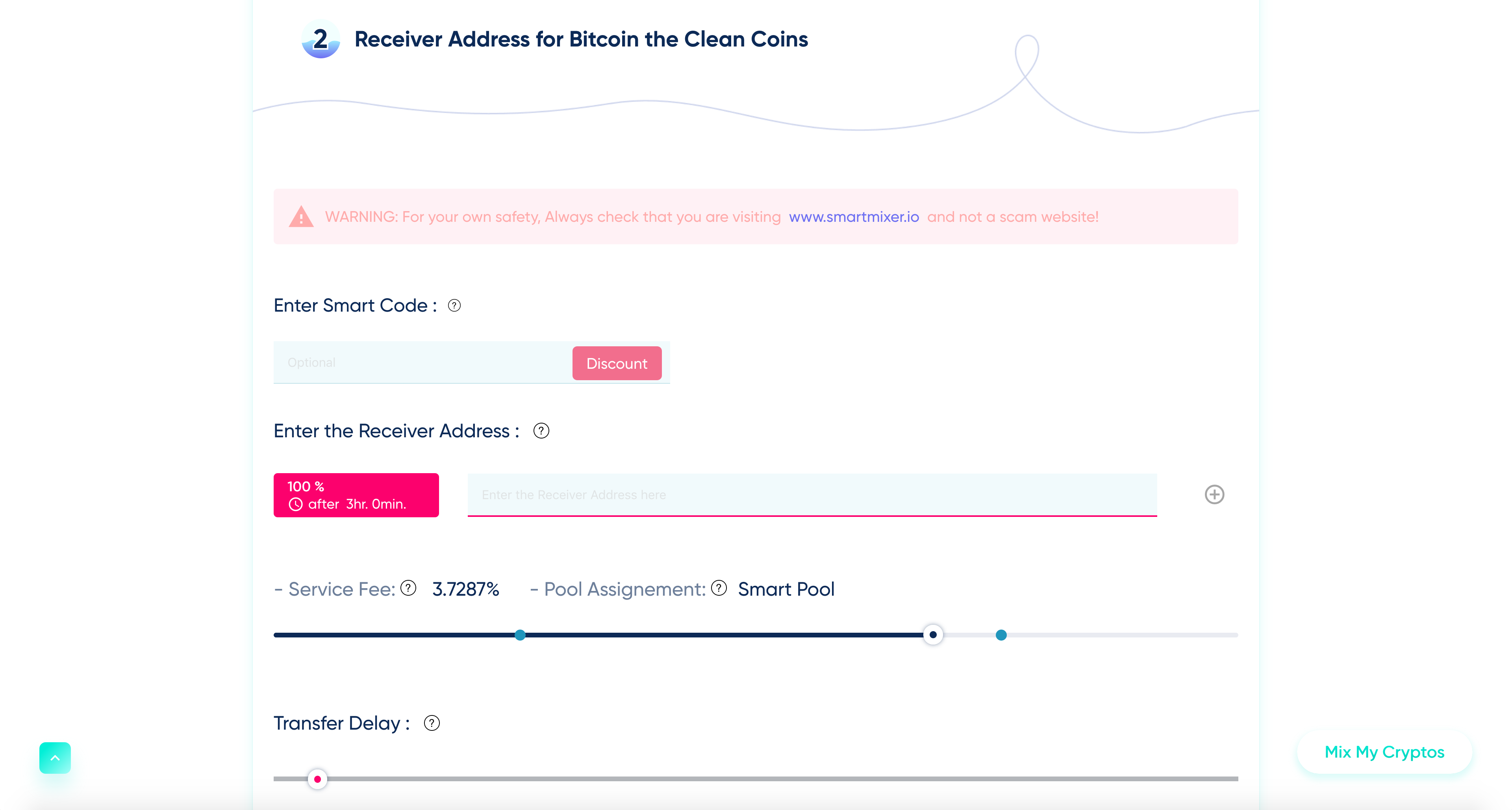 3. On the same window where you input the new address is a slot for setting the percentage fee. You may do so by pushing the slider accordingly. The least percentage payable is 1.000% and are dependent on the chosen pool.

The percentage fee refers to the portion of the coins that the platform retains for the mixing service.

SmartMixer has three categories that are the Standard, Smart, and Stealth pools.

Do note that the higher the fee you set, the more anonymous your transactions become. 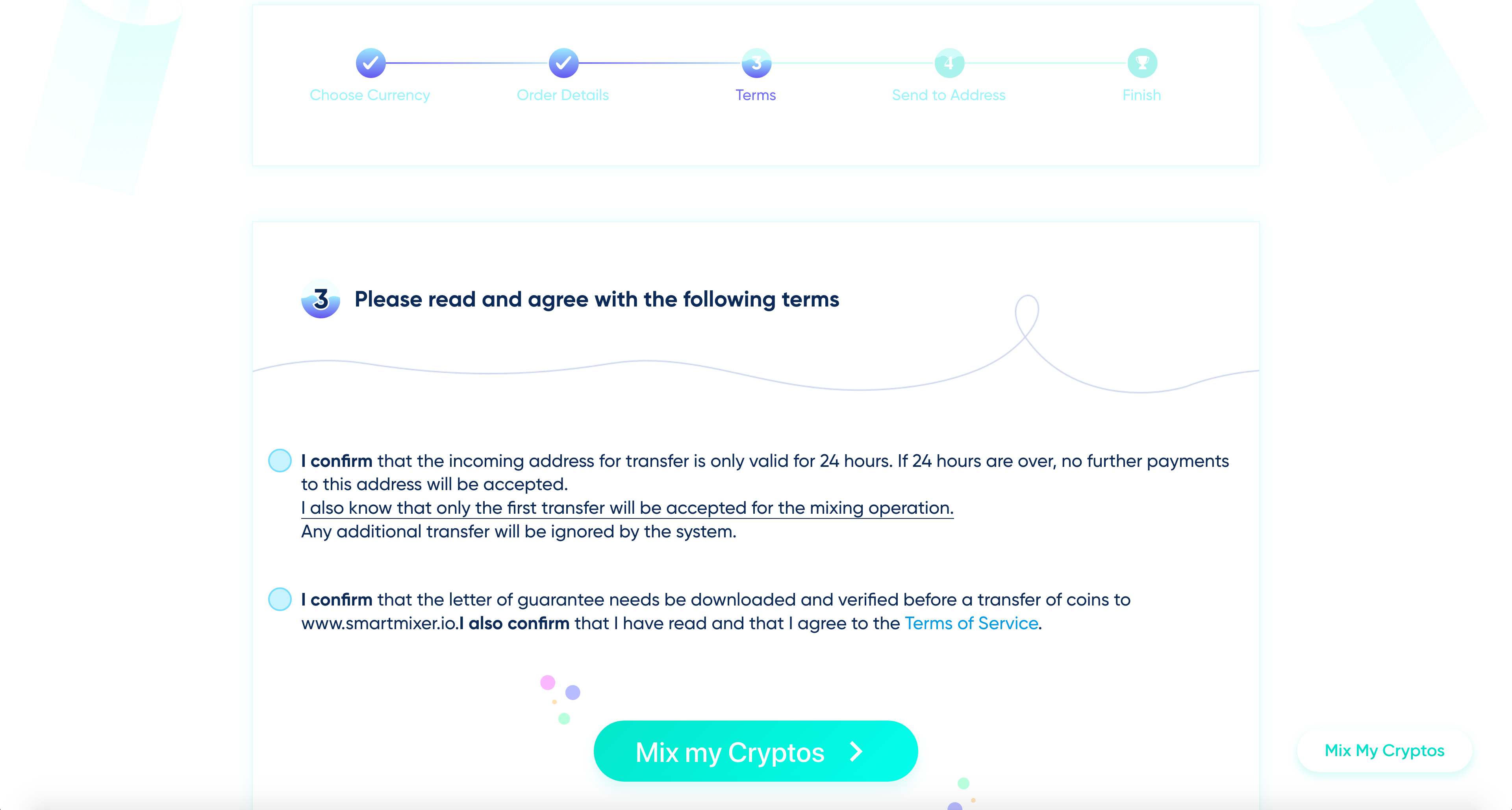 5. Read and agree to the terms of service on the website. Then, download the SmartMixer Letter of Guarantee and save it. It is important that you do so. Should any complications arise, you will need the letter when you contact SmartMixer.

7. After the set delay duration has elapsed, you will receive clean coins in the address that you provided.

Do something for your Right

Be Smart, Be Anonymous

Someone created a Bitcoin Mixing Order using the Standard Pool